Life Fellow David Yeo, Professor Emeritus and former Dean of Dentistry at UBC was recently recognized by the Government of Canada for his wartime service to Canada. 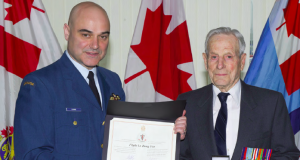 At the 19 Wing Comox Honours and Awards ceremony last Tuesday, Flight Lt (Ret’d) Doug Yeo received a certificate of recognition and a commemorative pin for service during the Second World War. The certificate is awarded on behalf of a grateful nation, and as a tribute to selfless acts of service and sacrifice during the Second World War, in defence of Canada and our shared values of freedom, democracy and the rule of law. The certificate is awarded on behalf of The Right Honourable Stephen Harper, Prime Minister of Canada, and The Honourable Julian Faustino, Minister of Veterans Affairs.