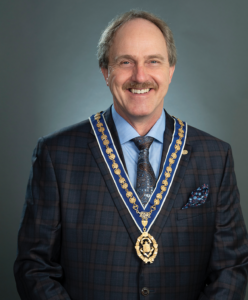 In June 2019, Dr. Kim Hansen was installed President of the Ontario Dental Association (2019-2020). A Brockville native, Dr. Kim Hansen has been practicing in nearby Prescott since 1985 and has seen the major changes that have happened to his community. Witnessing the severe economic downturn in the region over the past 15 years, access to dental care issues are near and dear to his heart.

As it is customary for CDA Oasis, we invited Dr. Hansen for a conversation about his journey in organized dentistry and his work with and on behalf of Ontario dentists. Still a practicing general dentist, Dr. Hansen continues to have a very good grasp of the issues facing his colleagues and facing patients of all ages in Ontario.

He sat down with me to tell me more about what he aspires to achieve during his year of presidency.

I hope you enjoy the conversation. We always look forward to hearing your thoughts and receiving your questions and/or suggestions about this post and other topics. Leave a comment in the box below or send us your feedback by email.

Dr. Hansen has been a general practitioner in Prescott, Ont. since 1985. After graduating from the University of Western Ontario in 1981 with an Honours degree in Microbiology and Immunology, he was accepted into Western's School of Dentistry, from which he graduated in 1985.

Dr. Hansen served as President of the Brockville Dental Association from 1993 to 2013, and from 2000 to 2013 chaired its Mediations Committee. He represented his component society as Councillor from 2010 to 2013 (and served as an alternate under the previous ODA Board of Governors).

At the ODA, he served on the Fluoride Task Force and the Prioritization of Programs, Services and Products Working Group, and chaired the Information Technology Sub-Committee. He was a member of the Audit, Finance and Risk Committee and currently sits on the Governance and Nominating Committee, of which he was Chair from 2018-2019. Dr. Hansen is also a Political Contact Dentist for the Eastern Region.