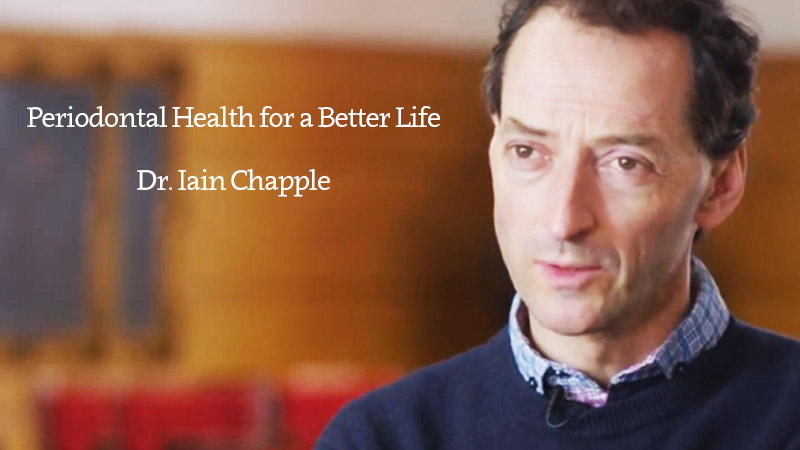 Dr. Iain Chapple recently spoke at the British Dental Association’s conference and his lecture was titled “Periodontal Health for a Better Life”. Over 90% of the population, 65 years and older, has at least one chronic non-communicable disease such as diabetes, cardiovascular disease, chronic kidney disease etc. and ~80% of these patients have 2 or more such conditions or co-morbidities. Chronic periodontitis is also categorized as a chronic non-communicable disease and in its most severe form is the sixth most common disease in the world.

There is an association between periodontitis, especially advanced states, and higher mortality rates as shown in various research studies. Some explanations include:
1. Common risk
People who are susceptible to periodontal disease are also susceptible to these other diseases due to genetics, lifestyle or the environment in which they live in.
2. Comorbidities
Individuals may be living with 2 or more diseases such as diabetes, chronic kidney disease etc.

A study published by our group in early 2016 illustrated that patients with chronic kidney disease and chronic periodontitis had higher mortality rates than patients with chronic kidney disease alone. A separate study by the same group demonstrated poorer vascular elasticity (higher vascular stiffness) and poorer kidney function if kidney disease patients had periodontitis as a co-morbidity. The microorganisms involved in chronic periodontitis create a bacteremia when the patient brushes or eats which prompts the liver to produce c-reactive protein. This elevation of c-reactive protein results in a chronic inflammatory state. The bacteria in the bloodstream also activate white blood cells to release cytokine and free radicals, causing systemic inflammation.

With respect to treatment of chronic periodontitis in diabetic patients, systematic reviews showed that by treating the periodontitis, there was a 0.38% reduction of Hb1AC that was similar to the effect of adding in another medication to treat diabetes into a metformin regime. Treatment of periodontal disease may actually reduce the medical cost of treating diabetes and cardiovascular disease patients.

There is strong data that shows that periodontal disease does have negative impacts on diabetes complications. Similarly, if one has periodontitis, there is an increased risk of developing Type 2 diabetes. This is related to the fact that general inflammation in the body is the major driver for developing diabetes as inflammation injures the pancreatic cells. Treatment of periodontal disease may have its most significant effect in less well-controlled diabetics and in those with a diagnosis in the early stages of diabetes rather than patients who are well-controlled. Cardiovascular disease and periodontal disease associations are more difficult to study due to the design of the studies, including cost as well as ethical considerations.

There is no single cause for periodontal disease. Plaque is the initiating factor, but the host must also be susceptible to the disease which is influenced by their genetics and lifestyle (nutrition, hygiene practices.) As such, prevention and education are key to reduce the development of the periodontal disease.

Periodontology in the future

Dentistry is somewhat intervention-driven and more and more implants are placed to replace missing teeth or teeth that are periodontally involved. However, the risk of peri-implantitis is real and difficult to manage. Studies have shown that it is more advantageous to retain teeth that are periodontally involved as they may still outlast implants. Implants are good treatment options but, at the right place, in the right situation.

Risk assessment is becoming increasingly more important. In dentistry, this will lead to more individualized care and help patients to take responsibility for their oral and overall health. Screening of patients is also important for medical conditions and periodontitis may well play a part in these risk algorithms in the future.