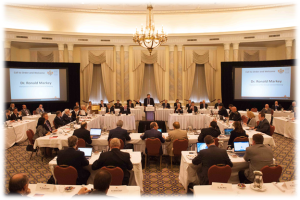 The Canadian Dental Association held its Annual General Meeting (AGM) April 23-24, 2015 in Ottawa. The AGM provides the CDA Board of Directors with the opportunity to present its accountability report, CDA’s year-end financial results and CDA’s proposed fee rate recommendation for the coming year. It also allows attendees to hear from other national dental organizations about their areas of activity.

CDA Board members reported on key issues of the past year, current issues and significant emerging issues. The reports were aligned with CDA’s vision of a healthy public, a strong profession and a united community.

Healthy Public Strategic Priority Team reported on their key issue; advocating for access to care for seniors, children and First Nations and Inuit Peoples. The team’s most significant emerging issue is prescription drug abuse, including opioids.

Strong Profession Strategic Priority Team reported on their key issues; including the image of the profession, the transfer of scientific evidence into practice, the confidentiality of patient health information, the CDA Seal program, the revamping of the standard dental claim form and the eReferral service. The team’s most significant emerging issue is the oversupply of dentists and its impact on the commercialization of dentistry and the ethics of the profession.

United Community Strategic Priority Team reported that their key issues are building relationships with organizations within and outside of dentistry and aligning communication vehicles to advance the vision of a united community. Their most significant emerging issue is engaging a dental community that is becoming increasingly diverse. 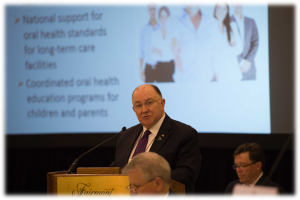 A year in perspective by Dr. Gary MacDonald

Looking ahead: next year’s priorities by Dr. Alastair Nicoll

CDA Awards were conferred on the following individuals for their outstanding service to the profession, their patients and their community: 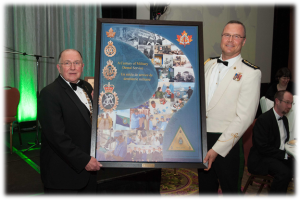 The Royal Canadian Dental Corps (RCDC) was recognized for its century of service during the CDA AGM and President’s Installation Dinner. Special activities are being planned in the National Capital Region in May 2015 to celebrate this special event.