What is Hookah and why is it making headlines? 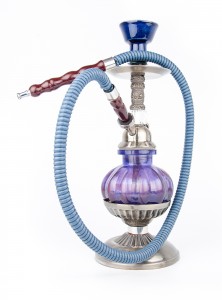 On July 7, 2014, a new study was published in the journal Pediatrics, published by the American Academy of Pediatrics, about the use of Hookah by US high-school seniors: Hookah Use among US High School Seniors.

The study examined the prevalence of hookah use which is significantly increasing among adolescents and aimed at delineating demographic and socioeconomic correlates of hookah use among high-school seniors in the United States.

Researchers evaluated data from 5,540 students who were asked about hookah use from 2010-2012. They found that nearly 1 in 5 high school seniors had smoked using a hookah at least once in the previous 12 months and that adolescents from higher socioeconomic status are at a particularly high risk of using hookah. Students who smoked cigarettes, and those who had ever used alcohol, marijuana or other illicit substances were more likely to use hookah.

Centers for Disease Control: the Health Effects of hookahs (Website)

Hookahs are water pipes that are used to smoke specially-made tobacco that comes in different flavors, such as apple, mint, cherry, chocolate, coconut, licorice, cappuccino, and watermelon. (1, 4)

Using a hookah to smoke tobacco poses serious health risks to smokers and others exposed to the smoke from the hookah.

Other Health Effects of Hookah Smoke

While many hookah smokers may think this practice is less harmful than smoking cigarettes, hookah smoking has many of the same health risks as cigarette smoking. (1, 4)

Hookah smokers may be at risk for some of the same diseases as cigarette smokers. These include: (7, 2)