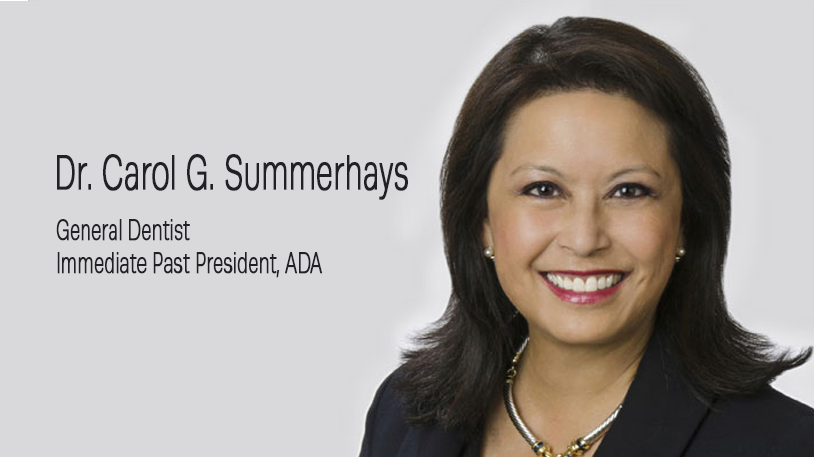 Dr. Summerhays, past president of the American Dental Association, has a long list of accolades as a dental professional and for her community and charitable involvements. Her illustrious career began as a pre-med student but, on a study trip to Mexico, she visited a dental school and saw numerous opportunities for herself and her future family life. As a result, she changed her focus to dentistry. Along the way, she was fortunate enough to have been mentored by Dr. Clifton Dummit, a community dentistry professor at USC.

Dr. Summerhays’ dental school class had very few women; and male classmates wondered why women were entertaining the dental profession. Upon entering the Navy, she noticed there were even fewer female dental officers. And again, male colleagues would comment about female officers and the fact that their service duties/roles were easier. Surprisingly, at present, there are still challenges of a similar nature in dental schools. Women are attempting to get involved in leadership roles on the local, state or national levels but, are being blocked.

American data shows that there is still an underrepresentation of women in organized dentistry, especially in leadership roles and as academic deans but, in higher numbers than women in similar positions in Fortune 500 companies. To change this, the ADA’s diversity committee tracks the number of women in board positions across the country, but the change has to start at the bottom of the pyramid – school, local, state levels – with more opportunities to network, share stories and feel empowered. National organizations such as the Association for Women Dentists (AWD) and the Women’s forum at the upcoming ADA meeting aim to facilitate such opportunities.

Other American data shows that there is continued steady growth of female applicants to dental schools. There has been a 1% increase each year since 2005 of female dentists. Even while there may be equal numbers or female and male dental practitioners, it is not inconceivable that, in the future, women may make up the majority of practicing dentists. Furthermore, women, not debt loads are changing the career path of dentistry as they are more inclined to pursue work in community dentistry as well as accept and treat medicare patients.

Reports have also shown that there is a discrepancy in wages between the genders with female dentists earning 20-37% less than their male counterparts at different stages in their careers. These differences have not been entirely accounted for, but may include factors, such as the fact that women may treat more medicare patients for lower reimbursements, more emphasis placed on preventive versus surgical treatment, spend more time communicating with patients and may be given lower compensation packages.

Looking into the future, Dr. Summerhays is optimistic that dentistry will become more integrated with medical care and that women will play a larger role in this integration. Women will bring about a positive change in the profession and their inclusive leadership style will be beneficial to associations and organizations. Dentistry is still a good profession and provides women with a good future even though there may be hurdles along the way. It is important to stay positive, continue to learn and focus on one’s future dreams.