Semiahmoo Dental Outreach to the Philippines 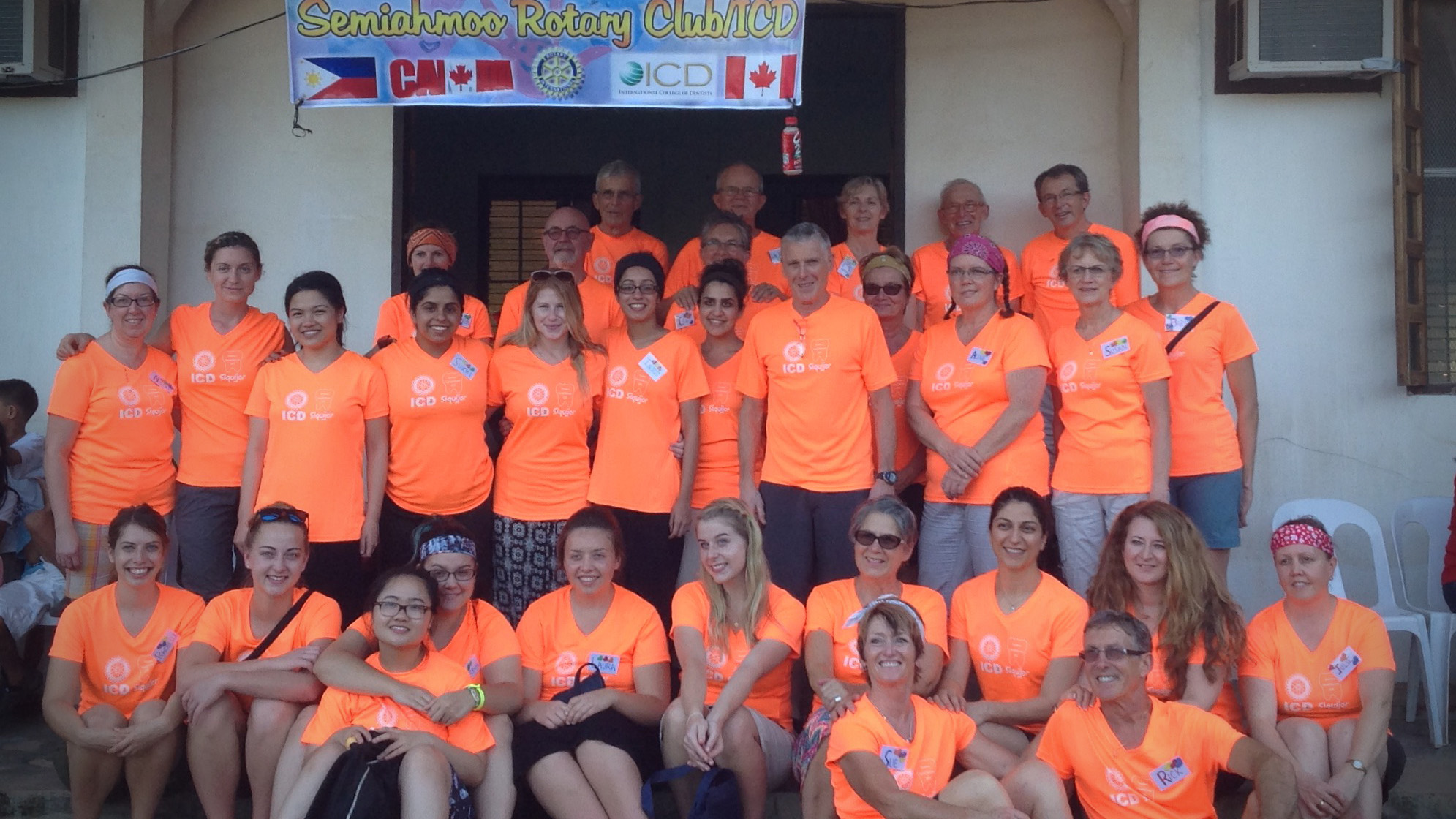 (Funding for this project was provided in part by the W.J. Spence – ICD Memorial Foundation of the Canadian Section of the International College of Dentists)

Our goals were to treat the children of three elementary schools near the village of San Juan, and to teach caries preventive measures to as many residents as possible.

In November 2015, the Semiahmoo Dental Outreach team travelled for the sixth time to the Philippine Island of Siquijor. Our group of 35, the largest team yet, included five dentists (Ken Stones, Murray Bohn, Rand Barker, Roger Spink and Greg Steed), several hygienists and chairside dental assistants, twelve Kwantlen University nursing students and two instructors, other RNs, a sex-educator and several additional volunteers. All personal expenses, including travel, accommodation, and meals were paid by team members themselves. 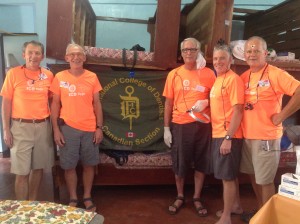 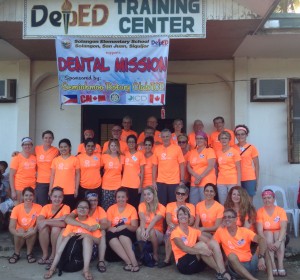 The Siquijor Rotary Club makes a huge difference in enabling us to concentrate on the clinical and prevention work. They welcomed us back this year, and helped us build on our work from 2010 to 2014. They had everything in place upon our arrival, provided about 20 volunteers each day, transported children to and from the clinic, and took care of any needs as they arose. They also scheduled the prevention team’s presentations throughout the Island.

Siquijor is an island of just about 95,000 people, with a very low average income. Due to the huge sugar consumption and poor knowledge of the sugar-caries cause-effect, there is a very high caries rate on the island. Although three government-employed dentists on the island do relief of pain by extracting teeth, we observed very little restorative work. There are also two private dentists but most people cannot afford treatment.

As before, we set up our clinic in the large dormitory in Solangon Elementary School. We had six dental units, four for restorative work, one for sealants and one for extractions. Over ten days, we saw about 400 children, restored hundreds of teeth, and extracted many teeth that were beyond saving. We also applied fluoride varnish to every patient. With the “sealant unit” (new this year) we were able to seal approximately 1300 teeth- well done Christine and Ideh!

We owe the clinic’s extreme success to many participants, especially the team members whose dedication and enthusiasm made it happen. The success of the trip was bolstered by the generous support of the ICD whose donations were used to purchase supplies and equipment. We also received some funding from individual members of the South Surrey community to support the work of the Siquijor Rotary Club. In the future, the Rotary Club will continue to supply prescription glasses to the school children of Siquijor. It is extremely rare to see anyone on Siquijor wearing glasses. This is because of the complete lack of eye testing and the expense of obtaining glasses. The Club sponsors lunch programs for undernourished children, is installing water systems for the schools with no running water, builds school washrooms and carries out many other community projects.

Nursing students were again an extremely valuable resource to our team. They undertook three prevention programs and were able to speak to parents and students in 60 of the 84 schools on the island. All the schools on Siquijor have had the prevention presentation at least twice in the past five years. The students had prepared by researching and developing presentations on caries prevention, healthy nutrition, and parasite infection prevention. The caries prevention presentation was customized to show Filipino snack foods and photographs from our triage station of badly broken down mouths. They also spoke to adults on the benefits of blood donations. Siquijor just recently obtained the equipment to enable blood donations to be taken and stored. Donating blood is a concept that has been unfamiliar to the people of Siquijor.

With the enthusiastic approval of the local school administration, we also provided sex education to all the high schools and colleges on the Island. Sarah McMillan, a UBC student, carried on the work started last year by Phoebe Reyes. This was well received both years and will hopefully become a permanent part of our outreach. Many hurdles had to be overcome to be able to do these education presentations, and we congratulate these two young people for their perseverance in making this happen.

Over the years, we have made an effort to set in motion prevention measures that will be ongoing after we leave. Our influence in Solangon has led to several meetings between a Solangon School principal, a Rotary club member, and some of the local small store owners who are located adjacent to every school on the island. These shop keepers sell large amounts of inexpensive candy and pop to the children with devastating results. At the meetings, they have been encouraged to look into alternative snacks that are more nutritious and less damaging. This has met with limited success. Dental education of the shop keepers is badly needed as we noticed their children were amongst the worst of the rampant caries patients we saw. Progress is being made on this front, as less sugary snacks are being offered for sale now at some shops. And, in early 2015, the school superintendent banned the selling of “junk food” in all 84 school canteens. This is something we have been pushing for since 2010 and we’re extremely happy to see this happen.

Building on past initiatives, this year we made some important headway towards dental education about prevention. The lack of dental preventive knowledge is quite disturbing. When contrasted with the information the public receives in Canada, it seems that Filipino dental organizations do virtually nothing to increase public awareness. Medical information is distributed to the public but not, as far as I could see, dental information. Even the link between sugar and caries is not known by the majority of the people we talk to. Instead, residents of Siquijor seem to view decay as a mysterious affliction that affects just about everyone!

Last year I had two meetings with the Governor and five of the six mayors of Siquijor, none of whom I had been able to meet with before. I explained the futility of treatment without prevention in the schools. I also talked about nursing bottle syndrome, which is a rampant problem on Siquijor. There was virtually no knowledge about its cause. We received a lot of interest from the governor, the health clinic supervisors and about half of the mayors. The heads of all six island health clinics were in attendance and they now include the prevention of nursing bottle syndrome in their pre/postnatal care programs. The local Rotary Club has followed up on this.

This year we also saw significant gains in the children’s dental health, but only in the schools that have a preventive program in place. About half of students in Solangon Elementary School are now caries free. In 2010 and 2011, fewer than 10 students of the 250 pupils were caries free. Solangon School is a successful working model of what can be achieved, and we need the other schools to follow suit. We look forward to seeing more signs of healthier children next year. As the Solangon School has demonstrated, it can be done!

Siquijor is a small Province with a small bureaucracy, so the possibility of change is very real.

My hope is that there will be a change made following the example of Solangon School. The principal who implemented the improvement in that school, Josephine Sevillano, has been moved to another school and is now attempting to achieve the same transformation at Tambisan School.

With donations from the Semiahmoo and White Rock Peace Arch Rotary Clubs, and a private donor, Mrs. Florence Wall of White Rock, we were able to fund construction and equipment for a permanent dental clinic on the grounds of Siquijor’s largest elementary school. This is apparently the only clinic in the Philippines offering free dental care to school children. It is set up for foreign volunteer dentists to work in, and there were two German dentists at the clinic during our stay. This will greatly increase the treatment available for the children of Siquijor.